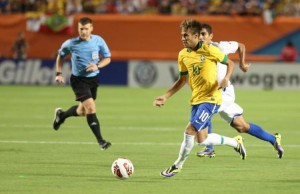 The Brazilian soccer team has won a new advantage off the field this week. This is because of a chiropractor invited by the team doctor to treat the players in Brazil. Chiropractic is a health care approach focusing on spinal function and alignment. It can be a treatment for pain, but it should also be used to improve function and prevent injury, which is what is being done for most teams at the World Cup.

Dr. Elisa, the team chiropractor for Brazil, uses an interesting analogy to explain the importance of chiropractic care. “I often compare spinal care with dental care. You eat and brush daily, and need to get regular care for your teeth. With the spinal column is the same. You use it all the time, but some people only remember to go for care when they have pain. Indeed, it is important to have regular preventive treatment “she explains. However, the world of soccer (football) is not new to her. She has treated former  soccer player and Brazilian Captain Carlos Alberto Torres, the three-time champion, since he had disabling back pain in 2010.Torres, credits chiropractic with resolving chronic disabling back pain that had kept him relying on crutches to walk. Traditional medical treatments had not helped, and finally someone referred him to a chiropractor. The chiropractic care he received enabled him to have a quick and full recovery so he could walk again without crutches and free of pain.

Although little known in Brazil, chiropractic is widely used by soccer (football) players. Dante, who has benefited from chiropractic treatment for more than six years since he played in Belgium, was one of the players who requested the services of a chiropractor.

“It is an excellent help. You feel that your body is more balanced, with everything in place. This makes a difference when it comes to high performance,” said the soccer player.

Football does take a toll on the musculoskeletal system of soccer players. Quite often players get injured due to the quick movements they do. Running, twisting, turning, changing direction, heading the ball and diving can all result in injuries. The neck, back, knees and ankles are prone to injure due to the stress exerted in the twisting action of the body when the feet are planted and the quick change of direction of the upper body. Quite often ligaments of the knees and/ ankles are likely to injure.

As Dr. Erik Plasker, the team chiropractor for one of the top US youth soccer teams noted, “while the other teams are scrambling to change their lineups due to injuries, our team bounces back fast and brings an energetic advantage to championship games. The players and coach agree that chiropractic care helps them compete at the highest level and avoid injuries.”